The term street art emerged in the mid-90s, also under the name Post-graffitti, to identify a series of heterogeneous and usually anonymous artistic expressions that began to flood the great cities of the West.

These techniques already existed as forms of protest or popular denunciation, in fact in the mid-1960’s templates were already used in Paris. With the expansion Of Hip Hop, urban street art become an expression of a subculture.

Post-graffiti spread in different cities, this genre has been widely cultivated in the main cities of the West. Even going so far as to intervene in famous locations around the world, such as a wall in Gaza, on the troubled Arab-Israeli border. New trends in street art led to the emergence of local groups and artists from each city, recognizable by their messages or their recurring characters. At present, many artists such as the British Banksy have achieved such a degree of recognition that they have been addressed in art books and some of their pieces have even been exhibited clandestinely.

If we classify street art based on its techniques used, we will have the following categories:

The traditional “graffiti”, that is the drawing or the clandestine writing on the city walls, only that in the case of urban art this graffiti is not simply a protest message, but it acquires an aesthetic sense: drawings, shapes, encrypted messages, etc.

It works based on a plastic or paper template in which the silhouette of what you want to paint is cut out, and then adhered to the wall before painting them with paint. In this way elaborate shapes are achieved and the text is combined with the image.

Printed on paper or other materials and glued to the walls, they last a long time and allow you to combine several to form large figures.

Sculptures and other interventions

There are other more daring forms of street art that involve objects from the public thoroughfare, telephone booths or even tickets, combining sculpture with other graphic arts. 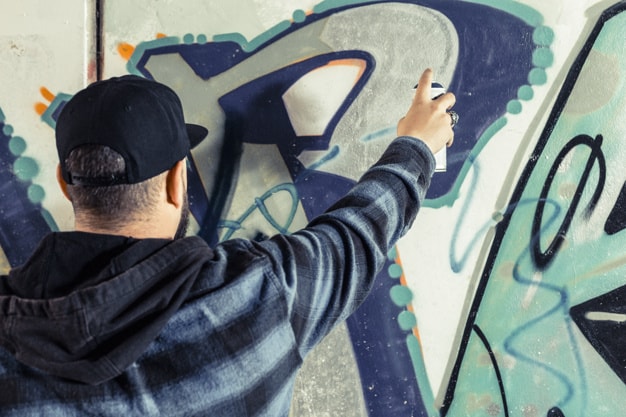 This type do not last long, as the walls are repainted and the surfaces cleaned by the maintenance of the local governments. But the truth is that urban photographs and footage of them remain.

The appearance of street art usually occurs at night or in the early morning, so that people the next day stumble upon it, instead of watching it happen. This gives them a surprise factor, but it is also due to the fact that artists sometimes expose themselves to danger (by climbing high surfaces, for example), or they choose government property to intervene, which is not entirely legal.

Although many of the interventions are signed with the artist’s pseudonym, many others are not. You don’t always know who this or that street artist is in real life.

As its name implies, street art is found in the street, in public transport, in everyday places, and not in museums or “controlled” places of artistic exhibition. There is something challenging about street art.